Call 4: To end abuse and neglect, live what we know: it’s everyone’s job to make sure children are alright

In 2002 a review of child protection reported with a title based on the observation of a young person: “It’s everyone’s job to make sure I’m alright.”

This was 16 years ago. Now, in 2018, to what extent have we embraced this sentiment?

Today, after more reviews, far too many children in Scotland are still experiencing abuse and neglect. Many children’s circumstances end up being investigated by the child protection system and often they are put into care. We are neither preventing child maltreatment, nor providing enough of the kind of support to keep children safely at home.

The young person who said this put into one short sentence what academics have been trying to say, with thousands of words, for years. The only way to solve child abuse and neglect is for everyone to understand that we can all be part of the problem and part of the solution. We cannot provide effective protection for children if we focus only on investigating individual cases once things have gone wrong.

The biggest barrier to reform is the tendency to seek an individual to blame. It is easy to label someone a ‘bad parent’. It is much harder to take a look at society and recognise that the way we organise our economy harms children in the first place and fails effectively to make up for harm after the event.

Children living in poverty are more likely to come into care than their affluent peers. Poverty undermines parenting and exacerbates the factors like substance misuse that are associated with maltreatment. But we tend to blame individuals for their drug use, we even blame people for being poor in the first place. There is huge public outrage when a case of child abuse is reported – and rightly so. But where is the outrage about the high numbers of children living in poverty and the lack of support for people who desperately need them? This individualisation of what a social problem is means that parents who struggle are stigmatised.

The building blocks are in place to tackle the causes of abuse and to provide non-stigmatising support for parenting. There is a range of policies aimed at tackling poverty, substance misuse and mental health issues. However, it is still easy for the more affluent to distance themselves from such initiatives. We have to move to a position where the general public is better educated about the links between poverty, associated social problems and child maltreatment.

With Getting it right for every child (GIRFEC) we have a framework that has the potential to deliver exactly the kind of holistic support that is needed. It is an optimistic model premised on the model of the people of Scotland accepting collective responsibility for the wellbeing of every child. It is informed by parents’ views that it is difficult to know who to turn to for help, hence the emphasis placed on ensuring that health visitors and teachers are available as sources of advice and guidance. However, it has stuttered because of the culture of blame and stigma which makes it hard for people to ask for help. We need the public to understand that any parent may need some additional help at any time and there is no shame in seeking support.

GIRFEC has stumbled because it assumes that parents can be signposted to resources – an unfounded assumption at a time of cuts.

We need greater empathy for the plight of those who are feeling the rough end of social inequalities and a greater willingness to share our resources fairly.

In summary, we need to ensure greater buy-in to the message that it is, indeed, everyone’s job to make sure that children are alright.

Article 19 of the United Nations Convention on the Rights of the Child: '...take all appropriate measures to protect the child from all forms of physical or mental violence, injury or abuse, neglect or negligent treatment, or exploitation...' 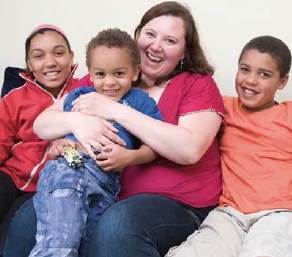 Find out more about our project work

Article 19: "... take all appropriate measures to protect the child from all forms of physical or mental violence."