Young people's right to feel safe online? We need a revolution in attitudes and understanding to make it real

Responding to Call 10 of our 25 Calls campaign, Marcus and Beccie, members of the European Network of Young Advisers (ENYA) discuss the need for changes in digital education to reduce risks and boost empowerment

Call 10: It's time to agree a common set of values in the digital world

An informed and self-assured nation of internet users is the answer, says ENYA group member Marcus

But it’s time we had a culture shift, away from bored teens in a classroom being scared stiff by another unbearable, out of touch online safety video, to engaged learners trying to find new ways to solve these problems online.

That is what the Scottish ENYA group has tried to achieve with its proposals.

Rather than being told to stay away from problems that we can’t escape it’s time we tackled them head-on. If we don’t recognise these issues then how can we be expected to deal with them?

People sit in silence about bad situations online because they haven’t been provided with the tools to deal with them.

The real danger begins when people who are ill-informed try to deal with drama online themselves. Suddenly the bullied can be branded the bullies. The accused, the accuser. The privileged, the oppressed.

The internet has become a modern Dr Jekyll and Mr Hyde. On one hand it’s saving lives and connecting people in ways never thought possible. On the other it is literally causing people to take their own lives, to harm and torture themselves or others and fuelling hatred.

Don’t get me wrong, I think the internet is an amazing thing. I can communicate with my friends in microseconds rather than hours or days. I can complete and hand in essays on the way to school. I can listen to any song ever recorded. I can order anything I want and have it delivered to my door all whilst skipping the queues at cafés and restaurants because I used an app to order ahead.

My life is on my phone. Literally. Even my heart rate when I walked my dog is recorded on my smart watch and sent to my phone, along with my daily steps, my bank transactions, my bus tickets. All of it possible due to the internet and the technology that uses it.

Those quickest to judge my choice to keep most of my personal details on my phone and laptop are usually older generations. They say I spend too much time using technology and rely on it too much.

I’d argue they are just as addicted as myself and my peers. Just because technology like smartphones has only been around for a part of their lifetime does not mean that they are able to live without it.

It’s time for a culture shift, from denial to empowerment, in a similar model to current climate change activism. It’s time for us to be more aware about how we use the internet.

We need to create an informed and self-assured nation of internet users. So that people know what to do and who to tell when confronted with an unwanted situation online. There needs to be a 'Green Cross Code' for the internet. Something simple along the same lines as ‘stop, drop and roll’ or ‘say it, see it, sort it’.

As for those internet safety videos? It’s time for new ones! Or failing that get rid of them altogether. People don’t use phones from 2005 anymore so why are we watching  “educational” videos that are 15, or more, years old?

For schools, activity clubs or groups and places of work it is very appealing just to show a video and let everyone get on with their lives. But with complicated issues such as online hate crimes and self-harm accounts it’s nearly impossible to predict how people will react.

The best thing to do is to have a discussion. An honest one, about how to deal with the challenges of navigating the internet. If people are able to talk about situations they are more able to cope with them.

When information about online safety is imparted in the form of a conversation people can ask complex questions, offer new ideas and challenge the advice to help make it better.

Hopefully the powers that be will listen to the recommendations made by the fantastic group of young people that make up the Scottish EYNA group. Who knows? With a bit of luck one of those people in charge might be reading this right now…

We can all agree that technology has come on in leaps and bounds in the past 10, even five years.

We’re using more and more technology in our daily life at a younger and younger age. We need to embrace technology; it’s here to stay, but we can no longer continue to deny children and young people quality education around it and the issues it presents. We have a right to a quality education (the United Nations Conventions on the Rights of the Child (1979), Article 28) and with technology seeping into every aspect of our lives and futures, this must be included.

All too often, we hear about the negatives of being online and social media, but forget to acknowledge the positives

Social media allows for social activism to spread in a way that before was never possible. Young people are becoming more and more educated on societal issues, like climate change, and making a difference through social media, such as by showing solidarity and advertising school strikes.

It also allows people to stay in touch with friends and helps to keep bonds with people that you might not get to see every day. I know that personally for me, without social media, I would have lost contact with a lot of people who I consider to be my closest friends.

Often the issue with social media education is that it is delivered in a way designed to try to scare young people or look down on them for using it, which will make young people even less likely to speak to someone if they do experience an issue, for fear of being judged.

These are future-proof skills that employers are looking for. This will especially benefit pupils living in poverty, who do not have the same level of access to fancy devices and reliable WiFi, compared to their more affluent peers. So, while their peers are honing and improving their digital skills without even noticing, many children living in poverty are at risk of being left behind without these key skills.

Young people need to know where they can go for advice and even legal action if this happens to them, so teachers need to be open, non-judgemental and trained so they can help the young person to the best of their abilities.

Click here to find out more about ENYA's work, supported by the Children and Young People's Commissioner Scotland ENYA was created by a Europe-wide network of Children’s Commissioners. Cartoon by Gérard Bédoret 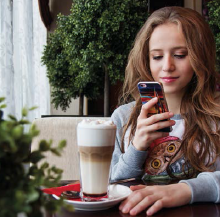