"To tell people that you can think what ever you want about heritage and that it's cool to work with."

The 'heritage hunters' project brought together Valley Primary School in Kirkcaldy with the Young Archaeologists Club (Dunfermline). The children and heritage partners worked together to explore sources of local heritage and to help develop the children's understanding and perception of heritage. The project formed part of the children's topic and was shaped by them at each step of the process.

Children identified their school and other local sources/sites as places for investigation and exploration. Sources included: Links Market, prehistoric Kirkcaldy, Raith Rovers Football Club and Kirkcaldy railway. These sources of heritage were linked to their interests or were sites that they had previously visited. Children came up with research questions and visited the local museum and library to carry out investigation and research.

Working closely with the Young Archaeologists Club the class was able to participate in Dig Box training as well as undertake an excavation in their school grounds. As part of this excavation the children found a number of items including: pottery, potatoes, sweetie wrappers, and even Lego! In addition, the group also led a child-led photo tour, created posters and built heritage models.

The project culminated in a sharing event at the school, where parents were invited to attend and hear more about the project and discover what the group had found out. The children shared what they had discovered in a number of creative ways including: plays, TV shows, question and answer sessions as well as more formal styles of presentation.

The group in Kirkcaldy came up with some lovely logo designs and drawings. Here are a couple. 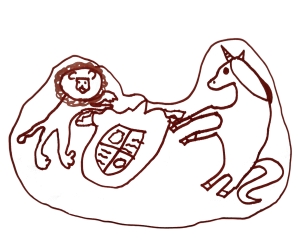 Find out more about the project work that was done in Glasgow.

Find out more about the project work that was done in Edinburgh.

Find out more about the project work that was done with The Citadel young mums group.

Find out more about the scope of this project